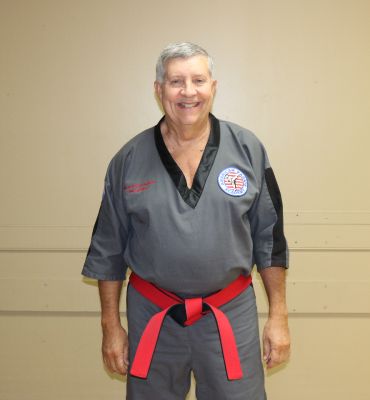 Sensei (teacher) Chapman is our Chief Instructor and currently holds the rank of 10th Dan (10th degree black belt). He is recognized as a Master and has the title of Shihan (teacher of teachers). Sensei Chapman charts the path of the dojo for the future. He sets the curriculum for all classes, determines belt promotions and leads the adult and children’s classes. Sensei has a vast wealth of knowledge and is the example of skill that we all aspire to obtain. The commitment to our dojo by Sensei Chapman demonstrates the benefits of the right attitude. Master Chapman began training in the Martial Arts in 1981 and started teaching in 1983. In 1985 he joined the Independent Karate Schools of America (IKSA), a worldwide support and sanctioning organization allowing the dojo to be chartered by Master Floyd Burk, the founder of the IKSA. In 1994 Sensei Chapman founded the American Karate Academy in Franklin. The dojo affiliated with the Concord Road YMCA in August 2001. Master Chapman serves as the National Director of the IKSA and is the Director of the IKSA Annual Seminar. The IKSA Annual Seminar is a worldwide gathering of member schools and is hosted annually by the American Karate Academy. Master Chapman is a member of the teaching staff at the world famous Karate College Camp (held annually at Radford University, Radford, VA). Sensei teaches sparring techniques and strategies at the camp. The staff includes such legends as Bill “Superfoot” Wallace, Renzo Gracie and Dr. Jerry Beasley. Master Chapman is a husband to Rennae and has 3 children and 5 grandchildren.  He has a Bachelor of Science degree and a Masters of Education degree from Middle Tennessee State University. He retired after teaching for 40 years at Franklin High School. Sensei Chapman’s hunger for all things “martial arts” powers his daily training ethic and he continues to grow as a martial artist through guidance from his Sensei, Master Floyd Burk.