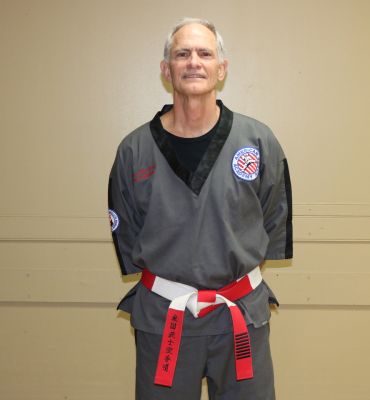 Sensei Hoyal is a Senior Instructor and holds the rank of 8th Dan (8th degree black belt) along with the title of Grandmaster. He assists in teaching classes and is in charge of teaching classes when Master Chapman’s duties call him away. Sensei Hoyal is a dynamic teacher of open hand and weapon forms, (also called “Kata”). He is an accomplished tournament champion instrumental in teaching techniques and sparring strategies to all levels of students.

Sensei Hoyal is the Assistant Director for the IKSA Annual Seminar and is Master Chapman’s Assistant at Karate College. Sensei Hoyal has been a student of Sensei Chapman since 1992 and began teaching in 1994. Sensei Hoyal is a husband and a father of two. He has been active with the local 4-H clubs were he has taught archery and gun safety at the annual state camp/retreat for many years. He has a Bachelor of Science degree from the University of Tennessee in Geology and retired as the Assistant State Geologist for the State of Tennessee.

Hobbies include hunting and camping. Sensei Hoyal is committed to the martial arts and the American Karate Academy as is evidenced by his actions and continued development as a martial artist.