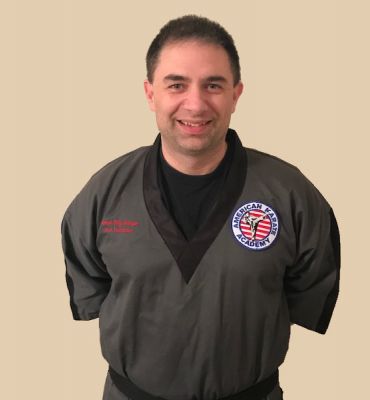 Sensei Sharpe began his martial arts training in July 2016 and began assisting in the beginners kids program once he earned his Purple Belt.  He joined the Black Belt Club after earning his Blue Belt while continuing to assist in the beginners class and advanced class.  He has also attended Karate College, the IKSA National Seminar and Camp Sidekick.  Sensei Toby Sharpe passesd his Black Belt test in March 2020. In September 2022 he was promoted to 2nd Degree Black Belt. He teaches and assists in both children and adult classes. He is married to Emily and has 3 children (all 3 are AKA black belts).

His 3 children, Sensei Weston (3rd Degree) Sempai Keaton (2nd Degree) and Sempai Maddox (Junior Black Belt 1st Degree) have been a part of our program for several years and they are a major reason he started training.

Sensei Sharpe works in sales for MedRisk, a Physical Therapy company.  During his free time, he enjoys spending time with his family and rooting for the Titans.